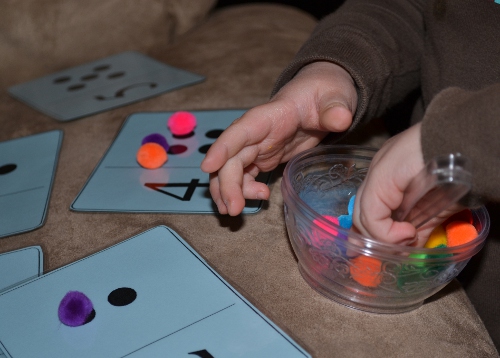 I figured out when I was going through the pictures from our toddler busy bag swap that we actually had 25 different bags, other than my own. So I’m going to spend this week explaining all of them, five at a time. I will provide links to somewhere with instructions on how to make each one, but I don’t know exactly which websites inspired these projects.

The Bit happens to be home sick with me today, so I took the opportunity to let her explore them a bit. She wasn’t too into it, but these first four are the ones she paid the most attention to on the first pass.

This is one that came from the person who organized the swap, who also happens to teach preschool, so there was no doubt it was going to be awesome. Here’s what was in the bag:

That’s actually two little plastic cups with colored pompoms, a set of cards numbered zero to 10 with dots corresponding to the number on the card, a tiny set of tongs (she said she found them and the little cups at Hobby Lobby in the party supplies) and a clothespin (as an alternative to using the tweezers. You can find this idea at Confessions of a Homeschooler, where there’s a link to a PDF of the cards.

There are a lot of potential things you can do with this bag, from moving pompoms from one cup to the other to counting pompoms of different colors, just working with the cards (they’re laminated so you can draw the numbers on them with dry erase) or placing the pompoms on the dots.

The Bit has played with tongs and tweezers before, so she understood what to do with the tongs right away and pretty quickly understood that she was supposed to cover up the dots, but she had to fine-tune placement of the pompoms on the dots with her hand.

When a pompom rolled off a dot, she would just put a new one on, so some cards ended up with more pompoms than they needed. She got that it was about counting, though, because she said “I made a one!” when she did that card.

We only did 1-5 so she put the extras on the cards by hand. Things started to go downhill here when the pompoms started rolling (we were playing on the couch).

Another one she paused long enough to play with was the sensory bag:

This one has a “wacky sack” (or sensory balloon) that’s filled with playdough and has a little face on it (that link shows them with pompoms on the outside; ours didn’t have that). There’s also a tub with things of various textures: a ribbon, a spiky ball, a little plastic toy, a feather, some Velcro and a piece of elastic. I want to play with this!

The Bit opened the little flip top part of the tub and pulled out the ribbon and the ball, then got frustrated she couldn’t get the ribbon back in that opening. I took the lid off for her but by then she’d moved on to the balloon, which she squished around a little.

Another one the Bit liked, but played with so briefly I didn’t get a picture, was the gel writing board:

This one is pretty simple. You take gel (the lady who made it said the less you use, the better) and glitter in a zip-top bag, mix them up, then tape it to a piece of foam board.

She included some Q-tips for writing/drawing with, but of course you can just use your finger, too.

This last one gets to count as two because two different people did I-spy bottles. The one we got was this:

which is really cute, large, and has some fun stuff in it like a paperclip shaped like a foot and a goji berry (that one’s going to be fun when the Bit finds it!). She was interested in playing with this but then I got in her way by taking the picture off the bottle and she got mad and didn’t play with it after all.

was smaller, in standard individual water bottles, but still very cute. More portable as well. This one mostly used different colored and shaped beads for the kids to find.

There are so many of these out there, and it’s easy enough to make you probably don’t need directions (gather stuff, take a picture, add stuff and rice to bottle, hot glue bottle shut) but here’s a basic description from Pinfluence and some really cute themed I-spy bottles at Counting Coconuts that would be great fun to make, too.

Whew! I made it before the end of naptime! Jamielyn at I Heart Nap Time would be so proud!

If you missed any parts of this series or want to review:

This project is linked up at Skip to My Lou’s Made by You Monday and Sarahndipities’ Make Something Mondays. Check them out for more great crafting ideas.