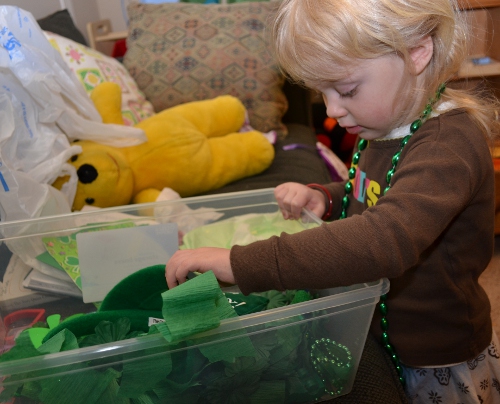 While the Bit was home sick last week and busy playing with something else (I think at this point she was drawing on her white board) I decided it was time to finally dismantle the Valentine’s sensory box and put together one for St. Patrick’s Day.

I hadn’t really intended to make this box specifically holiday because I didn’t want to buy anything, but my mom brought over a bunch of decorations and stuff (thanks, mom!) left from the holiday parties they used to throw, so the box became a combo of specifically Irish stuff and just random green things.

Here’s some of what’s in it:

OK, that was actually pretty much everything that’s in there. Other than the specific holiday stuff, most of the rest of this was already in her playroom (we have a lot of green stuff!).

The Bit had a lot of fun going through the box as I was putting it together (forgive the mess on the couch; that’s all the stuff from the old box. And Pooh Bear.).

I didn’t really intend for these to all be holiday boxes, but doing a new one each month is a lot of fun. I know in the summer there will be fewer holidays and I’ll have to get more creative, but that will be fun, too.

Do you do sensory boxes? Which themes have your kids liked the best? I’d love to hear your thoughts!

Thanks for stopping by!

This post is linked to the Weekend Wrap up at Tatertots & Jello and at the Weekly Round-up at It’s a Blog Party. Visit them for more great crafty ideas!