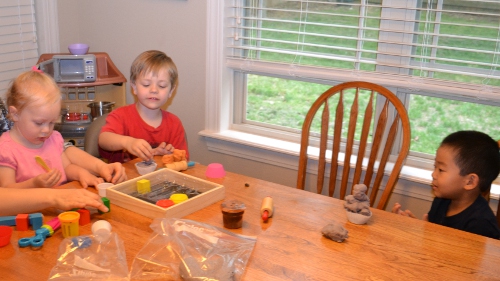 Last weekend we had a couple of friends and their kids over for a cookout, which meant we went from a household with one kid to a house full of six, ranging in ages from 6 to 2. Thank goodness we have a big house, and a big backyard with a sandbox and a water table, which kept the kids occupied until it was time to eat.

After supper a few of the kids wanted to take on the playroom, and we did, eventually (oh, the rice all over the floor!) but before we could get up there someone found the shelf of playdough.

We have a bookshelf in the kitchen that’s right behind where the girl sits, and I like to keep her playdough stuff on a tray on the bottom shelf so she can get to it if she wants it. Well, one of the kids (I think one of the oldest kids, in fact) spotted it and decided it was time to play.

Kids trickled over and before long all six of them were sitting and playing with playdough. Somehow I didn’t manage to get a picture of all of them together — probably because that didn’t last too long! — but it was still really cool. The kids were fascinated by the fact that you can make your own playdough and they loved that it smelled good.

The new grape playdough in particular was a hit (it’s still my favorite, too) and one of the girls hogged the chocolate stuff most of the time.

The kids found the cupcake cups, which I’d bought for the purpose of making playdough cupcakes, and which the Bit had never used for that purpose, so that got me pretty excited.

In all I think it was a very successful excursion: some kids who didn’t know about it learned you could actually make playdough, the Bit learned more about creative ways to play with it, and we got a bunch of kids to sit down for minutes at a time!

Have any fun playdough stories? I’d love to hear them!