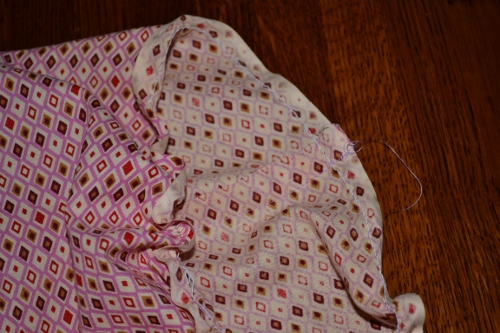 One of the very first things I ever pinned on Pinterest (20 weeks ago!) was this tutorial from A Small Snippet of a dress that’s made with a big piece of fabric and an old tank top. Basically all you do is cut the tank to a cropped length, cut the fabric so it’s wide enough to go around you 1.5 times, sew the side seam, sew across the top and then sew it to the tank using elastic thread so it will make ruffles and you can get it onto your body. Sew a hem and you’re done.

Well, as you can probably tell from all the sarcasm, some things are not as they appear.

Step One: Read the Whole Blog Before You Start

If I had been paying attention, I would have read down at the bottom that the bobbin should not be wound by hand if you have a machine where you drop in the bobbin. I’d pretty much figured this out for myself by the time I read it, because my machine was locking up and making all kinds of awful noises.

Unfortunately, that wasn’t my only problem. I also couldn’t actually get this method to produce ruffles. At least not at all consistently. The post makes it sound like all you have to do is sew with long stitches and it will make ruffles by magic.

Didn’t happen, at least not for me.

I got ruffles when I pulled on the elastic, but I couldn’t do that all the way around.

That post pointed to another tutorial, this time from Talk2theTrees, which didn’t use elastic thread but got the ruffling thusly: “hold the thread and scoot the fabric down.”

I don’t know what that means, but I tried holding onto the thread and that didn’t seem to work, either. The first post above suggests ironing the elastic could help, but it looked pretty much the same.

Oh, and Read the Comments, Too

The really interesting thing about this whole process is that reading the comments provided completely different instructions than the original post. Several times in the comments she says to make the stitches shorter when working with the elastic thread, even though it says in the instructions to use “long stitches.”

Whatever. I tried it that way, too, for the record, and that didn’t work, either.

I was going to try using the zig-zag over a thread method described by my colleague Debbie, but at that point I just didn’t really want to think about it any more.

Too bad I already cut up my tank top. That was a great shirt. I guess I’ll have to come up with something else to do with it!

OK, there’s my Pinterest fail of the week. I know I’m not the only one. Spill your horror stories!