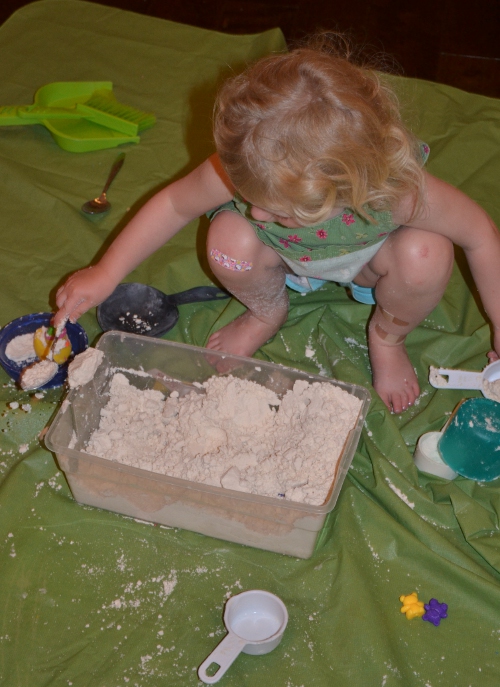 Yesterday I spent some time talking to my local MOPS group (which I’ve been a part of since it was founded, basically) about the same things I talk about on this site: crafting with kids, crafting for kids, the importance of creativity and patience and a sense of fun when it comes to doing creative stuff with our kids.

I’m not the best public speaker, so I can only hope what I said was helpful, inspirational and encouraging. I know I had fun sharing some of my recipes, tricks and ideas (and reiterating the awesomeness of Pinterest, which they already knew).

One of the big issues that some of the moms have — which is not really a problem for me right now, thank goodness! — is that their kids aren’t interested in art or crafty stuff. The best suggestion I could offer was to keep making stuff available and to try alternative methods for creating, like maybe sculpting with playdough instead of drawing with crayons. The idea of “spray painting” with liquid watercolor paints on an old sheet went over well, especially with moms of boys (I cannot remember who I stole that idea from!).

Other moms mentioned taking the time to put out materials and having the kid either want them to do it or playing for just a few minutes and then running off again. That’s an experience I can relate to (well, the Bit’s still locked up when we do a lot of our creating, but I do remember the Day of Art when we did four different art activities in about 40 minutes flat). Kids have short attention spans and we have to be prepared for that (having no expectations was a big mantra I shared, too), but I wondered, too, if some kids who don’t seem to want to do art would do better with a specific project/goal in mind (let’s decorate a picture frame for daddy, for instance) rather than just being presented with materials.

I’d love it if some of you could weigh in on how to help reluctant crafters!

As part of the day we also did a little busy bag swap. I offered some of my new favorite playdough (which I made in half-recipe batches with a full packet of Kool-Aid, which did seem to make the color better, though purple was still not great).

A cup with a hole in it to push pompons through (which I think the Bit will like, even though it’s a little young for her, since we’ve been on a pompon kick lately)

Cut up sponges to use as blocks that aren’t noisy when you knock them over!

Cut out foam shapes with puzzles to match them to

And a piece of felt with cut out shapes to play with.

Last night the Bit answered another question from the talk, having to do with whether she goes back to those sensory-type toys again and again or only plays with them once. With no prompting whatsoever, while all her boxes were still packed up from me taking them to MOPS, she asked first to play with her colored rice

and then to play with her cloud dough.

The rice comes out relatively often, maybe once every week or two, and I first made that for her back in January. The cloud dough does not come out all that often (probably because I almost never suggest it, because it’s so messy) but I first made that for her in December. So that’s a good six months of coming back to an item that took me all of five minutes and a few bucks to make. Tell me your kid has from-the-store toys that get that much play.

Things weren’t all sunshine and crafty goodness, though: we had to put the cloud dough away when this happened. But not so fast that I couldn’t stop to take a picture!

It’s not that I really mind her standing in the stuff, it’s just I don’t know if that dollar store box can support her weight (and I don’t want her to tip it over and spill it all, even though our surface is covered). I’m such a boring mom.