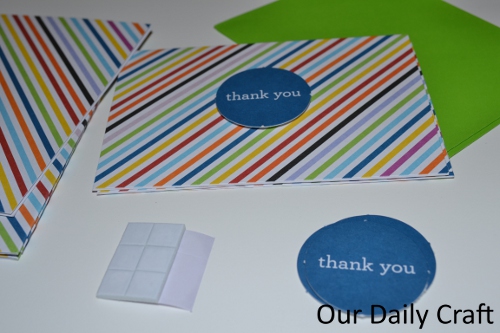 I came across some crafting this morning in a place I didn’t expect it: the thank you cards I bought for the Bit’s birthday.

You will probably recall that her party had a loosely held together rainbow theme (besides the pom-pom garlands, the goodie bags were in a rainbow of colors and included rainbow-colored lollipops and Skittles, among other colorful treats), so I wanted her thank you cards to follow that theme as well.

I found these adorable cards at Target and figured I could use them for other thanking occasions because they aren’t too kid’s birthday.

I didn’t realize until I cracked them open that they were “some assembly required.” The little “thank you” piece had to be attached to each card with a piece of double-sided adhesive foam.

This was not at all a big deal (other than that the thank you pieces were kind of hard to punch out of the card they were attached to) but it gave me pause for a minute.

These cards, by the way, are from Mara-Mi, a completely adorable stationery and gift company. They have note cards (and are fans of Oscar Wilde), journals, a wide range of adorable stationery and party supplies available at Target, wedding stuff at Nordstrom and a range of gifts from bottle tags to bags, soy candles and matches in decorative boxes, to name but a few items.

A note in the packaging said personalization is available, but that didn’t seem to be the case yet. There’s a button on the site for such things, and I look forward to its availability.

They even have a store and cafe in Minnesota. How cute is that?

(It should be noted because this sounds like a review that I bought these cards myself and no one asked me to or is paying me for my opinion. I just think they’re darling. But if they wanted to slip some free stuff my way, I would not be averse to it!)