I’ve told you about my little word for the year, but I also decided to take on another challenge for 2015: a year of making.

Like it sounds, year of making just means that I commit to making something, anything, every day this year, as well as documenting what I’m doing on Instagram. 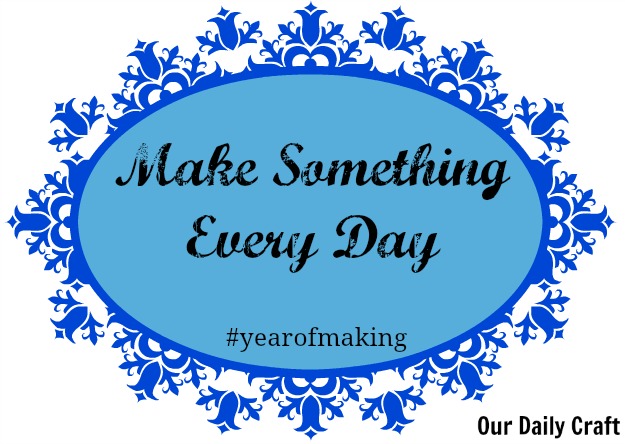 This idea started with fellow knitter and all-around crafty lady Miriam Felton in 2013. She not only committed to making something every day that year and documenting it online, she also made all her new clothing that year.

She’s continued now into her third year of making, and over time more people have joined in. Kim Werker, who writes about creativity and makes all sorts of things, started making daily in 2014, and she’s since written an ebook on how the year was and how others might take on a year of making. You can also hear Kim and Miriam talk about year of making on Kim’s Compulsory podcast.

I figured that I probably make or work on making something just about every day anyway, and this would be a way to be conscious about the making and documenting it. And I knew I didn’t want it to me knitting all the time, so I would have to think about other things I make, whether that’s cookies with the girl (Day 11) or a plate of nachos (Day 14).

I started the year by finishing two projects — a bracelet and a cross stitch project — that I’d started in early 2014, and I hope to focus more on finishing projects this year, too.

I also have spent a lot of time working on a big knitting project, a felted bag, that took up several days of reporting because it was the only thing I was working on (though I did make soup one day in there and forgot that making food counted, so I didn’t take a picture). One day I only knit two rows because I had a headache, but there has been progress on something every day.

I intend to do more making that is not knitting, to explore crafts I haven’t tried before, to go back to things I haven’t done in a long time.

And I want you to join me! I already sucked in my crafty buddy Gina, and I would like to remind you that a year does not have to start on Jan. 1.

What are you making this year? I’d love to hear about it!