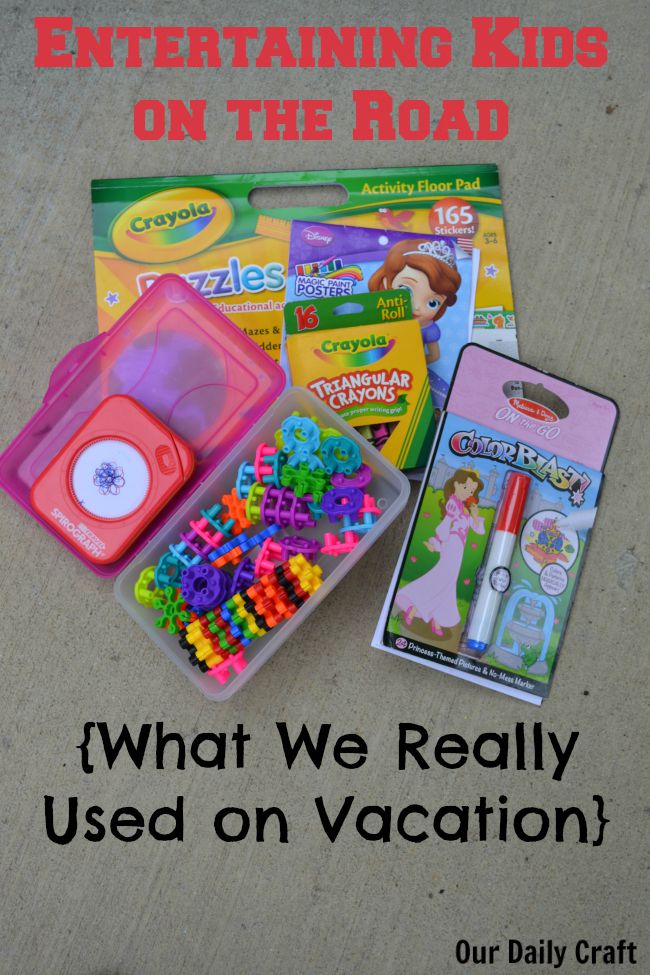 We recently went on a week-long vacation to Florida, and while I want to tell you a lot about what we did, today I want to focus on what we packed.

My biggest worry when it comes to travel is keeping the girl entertained, during travel, while waiting and in down times. I probably overpack books, coloring books and games because I can’t predict what she’ll want to use.

So here’s a look at some of the winners that came with us, which you might consider if you’re packing for entertaining kids while traveling.

The place to start, of course, is with the interests of your child. If they are really into dinosaurs or fish or princesses or whatever, you can tailor the activities and books you choose to bring to your child’s tastes.

A must-have for my child right now is stuffed animals to sleep with. She wanted a different one for every night we were gone — seven in all — so we picked the smallest friends we could find, let her take one on the plane and packed the rest in her suitcase.

Let them help pick out a few other things they want to bring, within reason. The girl wanted to bring all of her books related to the beach (there are, like, five of them) and a couple of electronic, toy computer type games. I wanted to say no to those, or make her only pick one, and I should have, because they’re kind of big and bulky and she only used them once, while we were waiting for our rental car.

In addition to the books that she picked out, I bought a new Nancy Clancy book (the chapter book version of Fancy Nancy) she’d never seen and grabbed a couple of books we had never read before. Those were big hits, both on the airplane and in the house during down times.

I don’t really recommend packing library books because I’m paranoid about losing them, but we brought a couple of those, too, and it was fine.

Likewise I packed some old coloring books and a couple of new things as well.

[Tweet “Want to know what toys and things we really used on our vacation?”]

Speaking of coloring books, they’re a big part of the action when we travel because it’s relatively easy to have one handy all the time when you’re waiting for food at a restaurant or just need something to do for a little while.

The big winner was a floor-sized Crayola activity pad I found at Target, along with a pack of triangular crayons, which are great because they don’t roll around.

I also brought a pad of Sophia the First watercolor pages, which only got used once, and a Melissa & Doug pad with a marker that makes different colors on the paper, which was a huge hit. She also loved the travel Spirograph, which was her first exposure to such a thing and was a lot of fun for all of us. 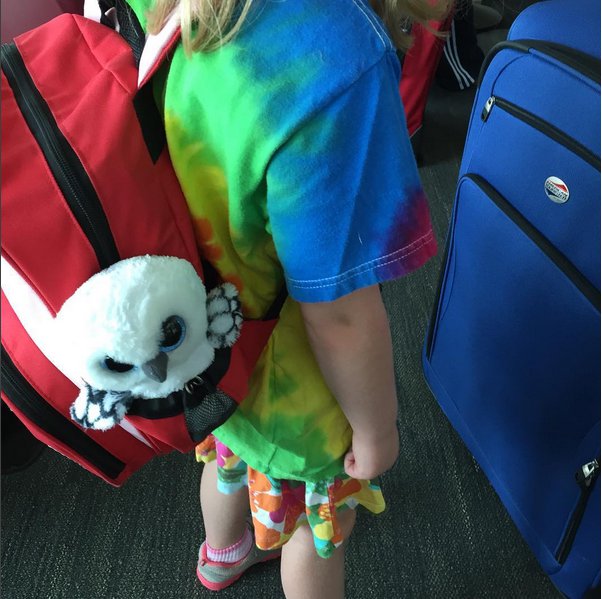 I found some little funky shaped plastic blocks in the dollar spot at Target that I thought might be fun, but I think the adults played with them more than the kid did.

Still, they were a great addition to the space set we bought at the Kennedy Space Center. They became rocket launch pads, and rockets themselves. I still like them, and they fit in a pencil box so they’re easy to take anywhere.

We went to a restaurant that didn’t have a kid’s menu but did give out Wikki Stix for waiting kids. She loved them. I’d meant to buy some for the trip but forgot so I was glad to have them. Until we lost them. Oh well, she has a birthday coming up.

Things We Didn’t Use

In addition to the watercolor pages and the electronic toys, there were a few other things I brought that didn’t get used, such as card games (which we don’t play often but I thought might be fun), educational flash cards (ditto) and a new set of glitter markers (the crayons were enough and she only used the markers a tiny bit).

What do you pack for your kids to play with when you travel? I’d love to hear what you’d add to my list.