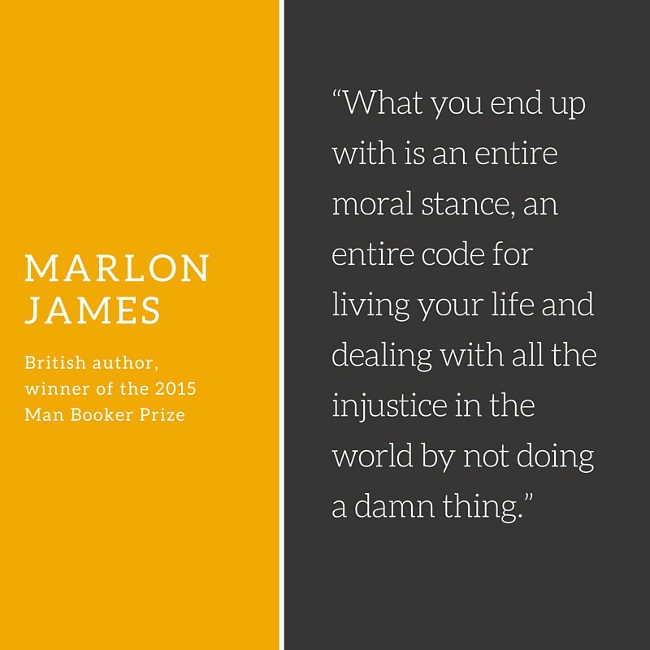 This month’s topic for #NWArkCares is civil rights. It’s another one that’s hard for me to write about.

I feel like, as a white, straight person, I don’t have a right to talk about racism, bigotry and homophobia. I will never understand — as much as I can empathize, or try to imagine what it must be like — what it means to live in a place where you could be fired, beat up or killed because of who you love, or where your child could be killed in the street and those responsible go unpunished.

But it does take everyone talking about it, even those of us who don’t know what to say, who worry we might say the wrong thing or be taken the wrong way, to really make things change.

Just because these aren’t my daily struggles doesn’t mean I can’t or shouldn’t talk about it.

I’ve been thinking a lot about this video by Marlon James, winner of the 2015 Man Booker Prize for his book Brief History of Seven Killings.

In it he talks about how not being a racist is not the same as being anti-racism.

Non-racists say things like “I would never do that” or “I don’t care who someone else loves.” They watch the horrible things going on in the world, and the daily heartbreaks of people in marginalized groups and say “oh, that’s horrible,” but they don’t make a single move to do anything about it.

James says it’s not enough to be a non-racist. Instead, we need to actively be anti-racist (or anti-sexist, anti-homophobes, etc.). Just thinking something is terrible doesn’t actually help anyone. We need to learn how to be a better ally.

So How Do We Do That?

The often-used term for people who support equality from outside a particular group is being an ally. But again saying you’re an ally and being an ally as a verb rather than a noun are two very different things. I’ve been the noun ally, the non-racist, but I haven’t done any verb type ally behavior.

Because I’m me, the place I start is reading. And actually a lot of “how to be an ally” information suggests doing just that.

I’m going to be spending time with the Melissa Harris-Perry’s black feminism reading list. I’ll be asking other people what I should read and watch, too (actually, I’m asking right now! Hit me up in the comments).

I’ll listen more than I talk. I’ll pay attention to the stories told by the media, to the stupid comments people make on social media and I’ll do my best to respond in productive ways.

I’ll try not to make assumptions about people.

I’ll keep in touch with local groups fighting for equality. Some for my local readers to check out:

And I’ll follow the advice in this great video, and remember that we all need to work to build this house, but we have to listen to the experts we want to support, and speak up, not over (be Michelle!). There’s a great reading list in the notes on this video, too.

I’d love to hear your thoughts on what we all can do to better allies to all people who suffer discrimination. Writing about it and talking about it are not enough, but it gives us a place to start.