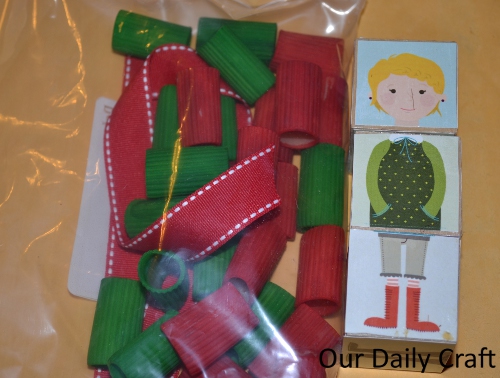 My daughter is already home from school for winter break, and it’s freaking me out a little bit. But it was nice that I got to create some little gifts for her classmates and teacher before the rush of the holidays was fully upon us.

I made two little things for the kids that your kids might like, too, if they’re preschool age. Or love blocks. And funny faces.

It’s been almost a year since my first foray into colored pasta, but the other day I saw some rigatoni at the dollar store and it was just so big and appealing I thought I’d make some more. I decided to go with green and red and initially was just planning to let the Bit play with it.

But she enjoyed it so much I decided it would be fun to share.

I cannot really overstate how excited she was by it. She helped me make it and was completely impatient for it to dry enough to play with. Then she spent a good 20 or 30 minutes stringing it onto a lacing string.

The next day she took all the green ones and lined them up on a tray. And she made me pasta, complete with trips to her play kitchen to cook it, a couple of times. She made me make it for her, too.

So I went back to the store and got two pounds of pasta. Not knowing the exact proportions that would work, I threw in a splash of rubbing alcohol and a bunch of food coloring — I probably used a half a container for each color.

Once dry I bagged them up — I ended up with about 14 or 15 pieces of each color for each of the 8 gifts I was making — along with a length of ribbon for stringing.

I decided that wasn’t quite enough of a gift, since some of the kids might not be as into stringing as the Bit is.

So I started thinking about these things I’d seen on Pinterest, Olliblocks. They’re produced by a company called Caravan Shoppe, which does all kinds of printables, from meal planning calendars to thank you notes to printable party hats.

The Olliblocks are printables that you cut out and Mod Podge onto wooden blocks. The basic set of printables has three options: boys, girls and animals. Each creature has a head, torso and legs, so a set of the blocks is three blocks. You can stack them in all sorts of ways to make different cute animals and people.

They’re completely adorable, and they were easy to put together, though it did take a long time to eight sets (24 blocks or 144 sides that needed gluing) but I think it was worth it. These things make me smile so much, and I hope the kids enjoy them, too. Whatever two the Bit didn’t get in her gift bag at school I’ll be making so we have all three here at home to play with.

The printables work for 1.5 inch or 2 inch square blocks, and you can buy each set individually for $5 each or all three for $12, which is what I did. Of course once you buy them you have them forever and can make as many blocks for personal use and gifts as you want.

There’s also a Christmas theme block set, which I almost bought, that has people dressed for winter and characters like Santa, a reindeer and some elves. So cute.

I wanted to make something special for the lady who takes such good care of these kids and teaches them so much, so she got a pair of the mitts I’ve been knitting ceaselessly lately. They’re exactly the same as the pair I knit for myself.

So I made a little tag using the Bit’s Melissa & Doug alphabet stamps (which technically she doesn’t know she has yet) and a bit of washi tape.

Run the tap along one side and stamp the words “take care” on the tag. Then just write in content and care instructions. Easy, but cute.

Are you crafting anything for Christmas? I’d love to hear what you’re up to!