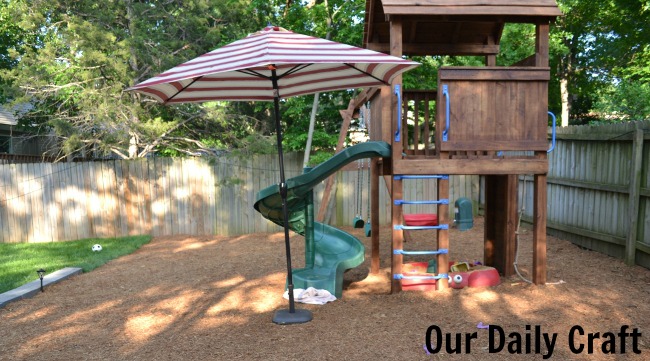 In the beginning, our yard was nondescript. Full of old trees, which was great, but there was this giant old hackberry tree in the middle of the yard that clearly had taken some storm damage long ago. It probably should have been taken out when the lot was cleared, but it made a lot of shade. I wrote about the drama of having that tree removed at the beginning of this process.

After that, we had a retaining wall built, and a concrete pad with a fire pit and a sidewalk connecting it all. We doubled the size of our deck and installed a play palace for the Bit. And had some landscaping done. We got a sprinkler system, front yard and back, and sod everywhere there isn’t mulch.

When I say it like that, it almost sounds simple.

Of course it wasn’t.

It was spring, so there was a two-week delay because of rain and the concrete guys being backed up. And even so everything seemed to take longer in reality than we’d hoped for in our minds. Even being prepared for a project to take twice as long as expected.

But we’ve been enjoying the finished product for about a month now, and I’m sure we’d all agree we’re glad we did it.

We’re outside a lot now, and having lots of people over — big and small — to play, eat and enjoy.

Even though I love working from home and not seeing a lot of people in my daily life, we like to have people over for food and fun, too. Sometimes I think I’d rather have people over than go out. Particularly now that we have a wee one who needs to go to bed at a reasonable time.

I also think it was important to both of us to have a special place for the Bit and her friends to play, and for them all to make happy memories.

The party yard is open. Who wants to come play?