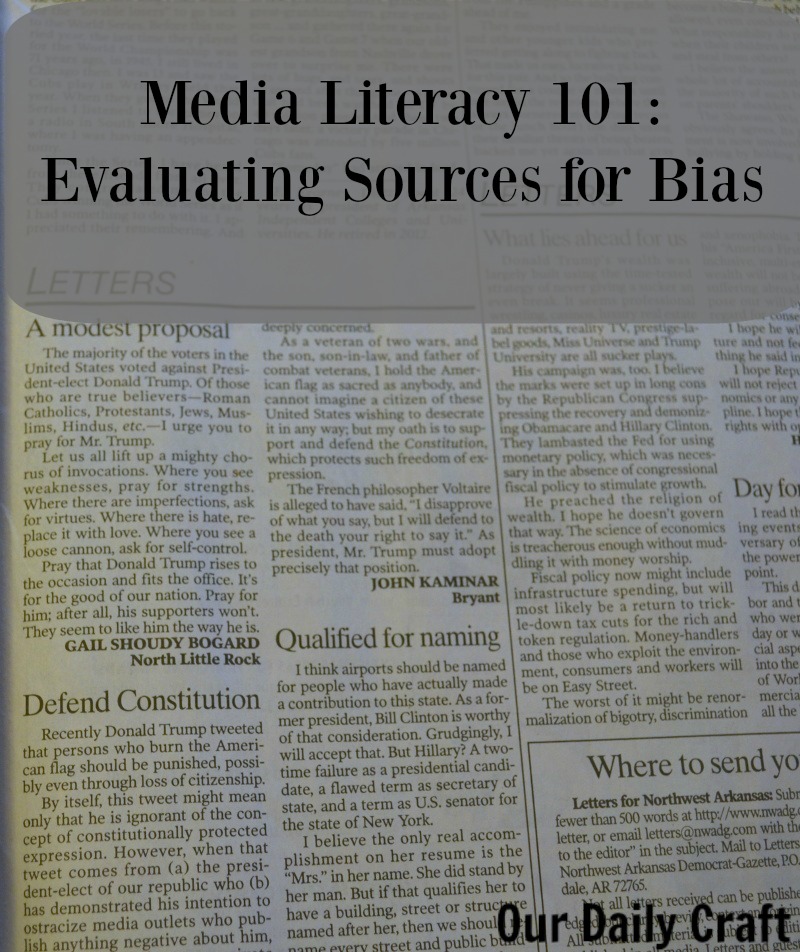 There’s a lot that goes into evaluating sources for bias — both the source of a news story and the sources quoted or cited in that story — but I’m going to cover what I can here in this media literacy 101 overview.

Bias means that the news source — whether the publication itself or the people or organizations used as sources in a particular story — has a particular agenda it is trying to push forward. So you might say that FOX News is biased toward the conservative agenda, while MSNBC has a more liberal bias.

The National Rifle Association has a particular bias that should raise flags when its officials are quoted in stories about gun control, for example, while the Center for American Progress has a liberal agenda.

A lack of bias is a hallmark of good reporting. When you’re in journalism school you are advised to try to cover as many sides of the story as you can, to look for opposing viewpoints and give them equal play in stories.

But that’s admittedly not always possible or something that’s advisable to do. Take covering something like the anniversary of the Sandy Hook shooting; you wouldn’t want to give equal time to the deniers who say the shooting never happened or was a setup to bring about a gun-control agenda.

And it’s fine to have a bias in the way MSNBC and FOX News do, in a sense, because it’s acknowledged and I think everyone who watches or works for these networks is aware of it.

It’s when news organizations state that they are unbiased and have no agenda but the truth and show bias anyway that we get into trouble.

It’s also worthwhile to note that a bias doesn’t always lead to fake news, though there are certainly websites that may take a kernel of truth and spin it so wildly that it becomes fake news.

Often bias is a little harder to pin down, and it can take doing more homework than just looking at the URL and noticing that it’s for abcnews.com.co (a classic trick of fake news sites is to use a URL similar to a real site, but with .co at the end).

First, consider the source in the sense of the publication, channel or site you’ve gotten the information from:

If the site you’re reading passes this level of investigation, it’s time to look at the stories themselves.

More tips on evaluating sources for bias can be found in this Google Doc from communications professor Melissa Zimdars, the Savvy News Consumer’s Guide from Bill Moyers and these tips on detecting bias from Fair and Accurate Reporting.

What would you add? How have you seen bias in the media lately? Have you told them about it?