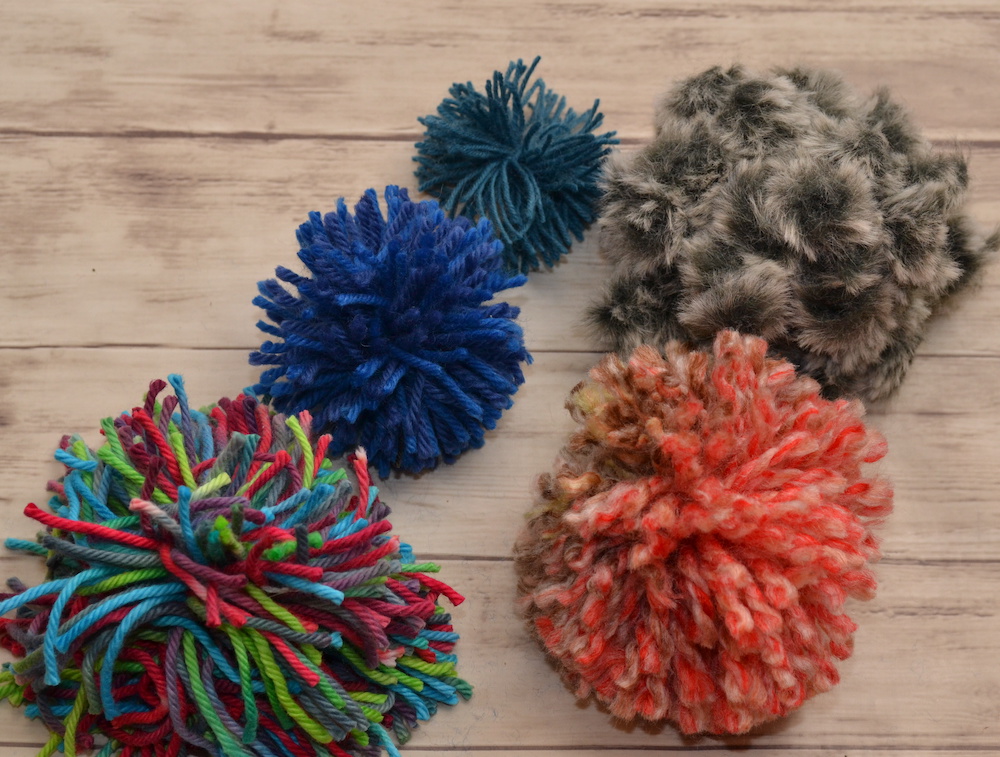 My daughter and I both love to make pom-poms out of yarn. It’s a really easy and soothing craft and you can use them in lots of different ways. She’s very slowly working on a pompom rug (sort of like this one from Simplify Create Inspire, but in rainbow colors), but if you don’t have it in you to make 100 or so pom-poms, even just a few are fun for projects.

There are lots of different ways to make pom-poms using things you buy or that you have around the house. Here are five methods, arranged roughly in order from my favorite to least favorite based on the finished product.

How to Make Pom Poms Using a Purchased Pom-Pom Maker

My absolute favorite pom-poms are made with purchased pompom makers. And my favorite pom-pom makers are Clover brand. I love the extra large one because it makes big, poufy poms but all the sizes are great. You might want the full set for a variety of projects.

These pom-pom makers are really easy to use. They have two pieces that snap together and the pieces have arms that swing out. Line up the two pieces so the arms are together.

Wrap yarn all the way around one pair of arms, cut the yarn and repeat on the other side.

Click the arms back into position on the circle. Use scissors to cut down the middle between the two arms all the way around. Use another piece of yarn to tightly tie the middle of the pom-pom, then pull the circles away. Fluff and trim your pom-pom.

I was actually pretty surprised by how much I liked making pompoms with a classic cardboard template. To do this all you need is a piece of cardboard and two round things (I used the lid from a jar candle for the outer ring and a water bottle lid for the inner ring).

Cut into the outer circle again, so there’s a wedge out of the circle. This is how you wrap the yarn around, so make it big enough to make that easy (I actually made mine bigger after I started).

Line the two cardboard pieces up on top of each other. Wrap the yarn all the way around, making sure to completely cover the disks but try to keep the yarn from falling off the ends.

Cut the yarn all the way around between the two disks. Use another piece of yarn to secure the center and pull the disks out.

If you have two empty tubes from toilet paper rolls or paper towels you have everything you need to make good pompoms. Just hold the tubes together and wrap your yarn around both of them as much as you want (pro tip: more yarn = bigger, fluffier pompom).

When you’re done, cut your yarn and use a different piece to tie the middle of the bundle, between the tubes. I found it easier to tie a tight knot if I slipped one tube out before tying.

Then trim the yarn on each side and fluff and trim as necessary.

Making Pompoms with Your Hands

You can also make pompoms just with your hand, wrapping the yarn around your hand, slipping it off so you can tie it in the middle (or get someone else with hands to help you) then trimming on the sides.

I used a fake fur yarn for this one, just for fun. It looks like a Tribble. I’m OK with that.

Pompoms with the Loome Tool

Here’s another tool you can buy that will help you make little pom-poms (also tassels, braids and other little bits with yarn and thread).

Loome Party is a book that came out back in 2018 and it includes this little tool that looks sort of like a slingshot with grooves in it that you can use to make lots of little yarn projects.

To make a pom-pom you stick the end of the yarn into a groove, wrap the yarn around the pegs as many times as desired, then trim the yarn when you’re ready. Tie in the middle and cut down each side as usual.

This one is a lot like using your hand, only on a much smaller scale. If you need a little pompoms to decorate cards of for other purposes, this is a fine option. (If you need even smaller pompoms, you can do the same thing with a fork.)

Ways to Use Pom-poms

Now that you know how to make pom poms and I’ve convinced you to make a bunch, what are you supposed to do with them?

Or you could make a wreath, like this one from Red Ted Art. I also have a holiday wreath made with yarn pom-poms, but you could use any colors and use it as a decoration for a craft room. She also has a super cute spring wreath with pompom sheep.

You can also use purchased or homemade pompoms for painting, as with these painted pineapple and watermelon crafts from Happy Toddler Playtime.

Try doing a pompom tunnel race or have little ones push pompoms into a bottle for a bit of motor skill play. Both these ideas are from Best Toys 4 Toddlers.

Make pom poms into baby chicks or bunnies with these tutorials from Sun Hats and Wellie Boots, or make a spider, apple or bunny pencil toppers from Red Ted Art. The Craft Train has a cute spider pompom craft as well.

And because Maggie is basically the queen of pompom crafts (among many other things) she also has pompom purse charms and Angry Bird pompoms, which she suggested would be fun to use with a homemade catapult. I totally agree.

Get set for Halloween with this fun candy corn light bulb pompom garland from Anne’s Entitled Life. Make Love bugs with instructions from Rhythms of Play or A Little Pinch of Perfect.

Thimble and Twig has a fun tulle pompom necklace, which you could do with regular yarn pompoms, too.

Let kids direct the crafting by turning pom-poms into monsters or aliens like this one, also from Thimble and Twig. Or make them into finger puppets, with this tutorial from the Soccer Mom Blog.

Do you make pompoms? How do you use them? Now that you know how to make pom-poms I hope you’ll share your creations.