I have always felt bad about calling this a craft challenge (though it’s called that because in my head it’s the Our Daily Craft Challenge) when really it’s all about boosting creativity in all sorts of ways. But you all will just have to bear with the name and realize that we’re doing a lot of stuff here that’s not crafting.

If that wasn’t already clear, today’s challenge should help with that.

I want you to write an autobiography.

But I want it to be full of lies.

Change your gender, age, number of siblings, what you do for a living, home planet, all of the above, whatever you want.

Set a timer for 10 or 15 minutes and just write. Because you know me you know I’d rather you write in a notebook than on the screen. You can’t edit yourself as easily that way.

See what comes up.

If I didn’t make that clear enough yesterday, it doesn’t have to be good. I just want you to try it.

I would love if you share a little of the experience and what you wrote here, but you don’t have to.

I used to write fiction fairly regularly, but it’s been a long time. I found this to be a lot of fun, though it’s not entirely autobiographical and it feels like it’s edging ever so slightly sinister (what happened to the parents?).

I was born in the mining colony of New Sydney, one of the first generation of kids born on the moon. In those days the only requirements for colonists were that they be strong, hard-working and fertile, which my parents were.

It also helped if you were running away from something, since there was little chance you would ever go back to earth.

My parents were doing that, too. In their case they were running away from someone, or at least the shadow of someone.

The memory of my brother, who died in a house fire when he was in infant, was enough to send them into space, never to look back at that blue orb again.

I’ve never visited, either, though I’d like to be able to take my kids there someday. For most families, though, going to the moon was a multi-generational one-way trip.

The first colonists couldn’t have afforded to go on their own and would never be able to go back unless they committed a crime bad enough to get them shipped back.

Like the settlers of old, they had to tough it out or die trying.

My parents toughed it out. But they were hardened by the experience. Those early years when so many crops failed and no one quite knew what they were doing.

It would have been so easy to give up.

But then they had me.

In a way, I guess I saved my family, gave them something to live for again.

I hope they thought it was worth it. That it wasn’t just something they had to do to fulfill their contract.

I would certainly take existence over non-existence any day. But you never know what other people might have chosen, had they been given a choice.

As for me, I think I really did want my kids, though this is a culture where having a family is prized, so I don’t know if I might have felt differently in a place without such biological pressure.

Each couple here is allowed two children, and we had them. Owen is six and his sister Maya is four.

They’re pretty amazing. I guess every parent thinks that about their kids, needs to believe that they’ve put something special out into the world, that they will leave behind a better place. 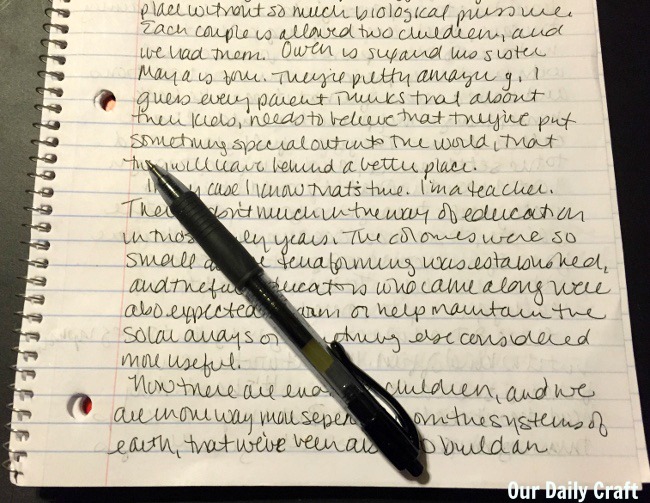 In my case I know that’s true. I’m a teacher. There wasn’t much in the way of education in those early years. The colonies were so small as the terraforming was established, and the few educators who came along were also expected to farm or help maintain the solar arrays or something else more directly useful for survival.

It was more like being home schooled with a group of friends than a standard earth education.

Now there are enough children, and we are in our way more separate from the systems of earth, that we’ve been able to build an educational system. We give them all the basics, of course, but we try to focus on what the child actually wants to learn and how we can make them a happy and productive member of our little society.

For some kids that means lessons in philosophy or astrophysics beamed from earth; others are painting or working with farmers to learn how to increase yields. Some are learning to weave; others are helping collect the histories of those pioneers who are still with us to help preserve our own traditions and have a record of what it was like back home, though my parents wouldn’t have called it that.

They were fully committed to the settlement, and I am, too, though I often wonder what it would be like to really walk through a forest, to breathe real air, to see those oceans pulled by the force of our home, not just in simulations, but in real life.

To know what they really gave up to come here.