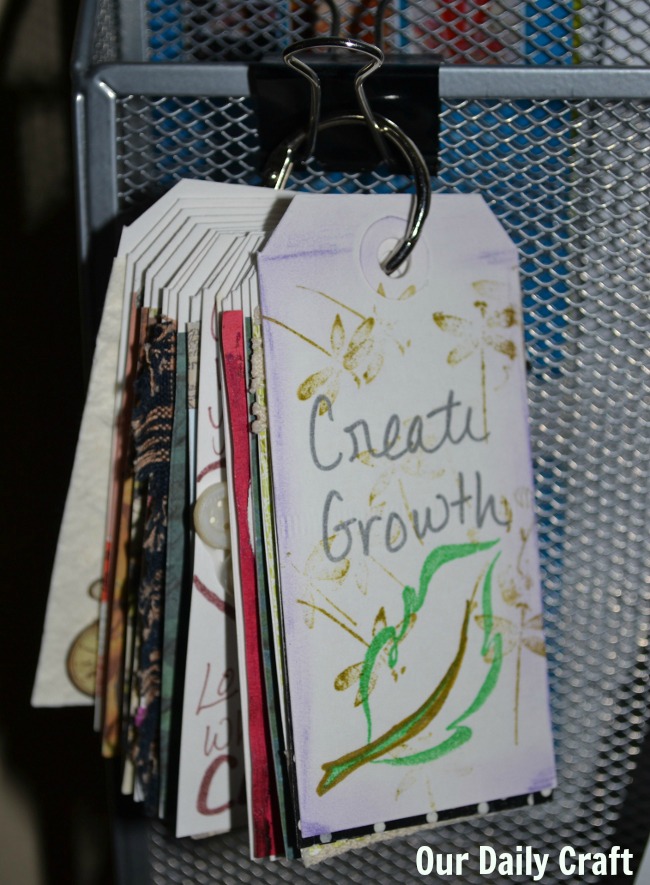 It actually doesn’t come as that much of a surprise to me that I’ve kind of washed out of One Little Word. It’s hard for me to focus on anything — even when it’s just one little thing — for a whole month, let alone a whole year.

I think I did really well for the first couple of months. Then I just read the content from Ali Edwards and skipped the artsy assignment parts (ironic, because my word is “create”).

Then I stopped even opening the emails.

I’m still thinking about it. My little cards I made at the beginning of the year hang on the organizer directly to my right when I sit at my computer. This month’s is Create Growth.

And man, am I ever doing that.

Just not in the way I meant. I wanted to explore growing as a creative person and how I can use my blog as an outlet to help others with their creativity. And I wrote that before I had the notion that I wanted to talk more about women and creativity and helping moms and others regain their creative spark.

Which has sadly been missing from this blog for a while because I haven’t been feeling that creative.

Well, I’ve been knitting a lot (more on that in a second) but I’m spent. I don’t feel like there’s anything left for any other crafting or creating right now.

And I need to write about that, why it’s happening and what I can do about it, but I don’t even feel like doing that.

My focus is elsewhere, as it really needs to be right now.

The way I am growing this month, it turns out, is as an author. My new book, Quick & Easy Baby Knits, has basically been released already — a full three weeks before I expected it. This morning Amazon told me it had 12 copies left and that you could order one and get it tomorrow. Never mind that I still haven’t seen it. (I will tell you more about it as soon a I do have my hands on a copy.)

So I’m doing a huge amount of growing, really, really fast. Or at least trying to.

I’m in the process of growing into a confident writer, willing and able to share her work with the world, who doesn’t feel like a total fraud who’s just been getting away with it for six years until this book came out to prove to the world she really had no idea what she was talking about.

There’s also a post in here somewhere about how people/women/creatives so often feel like big old fakers, even when they’re in the process of doing really awesome stuff.

But I have to get a little distance from it first.

In the meantime, all that knitting I’ve been doing?

It’s for the next book.

(Which is not official yet, but the proposal is with the publisher, and I’ll let you know when I know. But I’m sure excited about it.)

What have you been up to this summer?